We are living in a climate emergency. So how can we continue to travel on holiday given that most forms of transport burn fossil fuels that emit carbon dioxide, which contributes to climate change? Our low carbon holidays travel guide provides lots of information on how to go greener, including car-free guides to travelling to many of the UK's protected areas, details on flight-free travel routes from the UK to Europe, tips on how to choose a green hotel, as well as the latest decarbonising technologies to help minimise your carbon emissions.

High speed TGV train along the coast of the South of France. Photo: RailEurope

The concentration of carbon dioxide that is currently in the atmosphere – currently 417PPM - is higher than at any time in at least 800,000 years. Since the Industrial Revolution in the mid 18th Century, carbon dioxide levels have risen by more than 30%. In addition, other greenhouse gases such as methane and nitrous oxide are also released through human activities and contribute to climate change.

Here are a few other nuggets of information about the emergency, as reported by the BBC:

· If the current warming trend continues, temperatures could rise 3-5 degrees Celsius by the end of this century.

· Temperature rises of 2 degrees Celsius had long been regarded as the gateway to dangerous warming. More recently, scientists and policymakers have argued that limiting temperature rises to 1.5C is safer.

Here are our a few tips for being a greener traveller:

According to the Energy Savings Trust, the carbon emissions for travelling from London to Edinburgh are that flying emits 144kg carbon dioxide per person; one driver doing the journey in a medium sized petrol car emits 120kg, while travelling by train emits 29kg. For travelling to Europe, there’s even more of a difference (as the trains emit less carbon dioxide – some are run on electricity rather than fossil fuels, though that electricity is only really green if it's come from non-fossil fuel power generation): travelling by Eurostar, for instance, emits approximately 10 times less carbon dioxide than travelling by plane (see Eurostar’s Tread Lightly programme). For more information about the carbon emissions associated with travelling on trains and planes, see our page on Carbon Emissions Data. If you do fly, it's worth remembering that some bigger planes burn a gallon of fossil fuel a second so it’s hard to see how they can be framed as 'green', but there is quite a large disparity between airlines, with some far more carbon-efficient than others so picking a more efficient airline is something you can do. Likewise, more fuel is burnt on take-off and landing, so try to avoid lots of polluting short-haul flights. For more information on the carbon emissions associated with flying, see Atmosfair’s Airline Index and the associated document Flight Emissions Calculator, which explains its methodology.

Travelling as a foot passenger on a ferry has a low carbon emissions profile (see data from the Dept for BEIS later in this article). Many of the departure ports in the UK and in arrivals ports in Ireland, France, The Netherlands and Spain are well served by public transport, so you can take the train or coach to the ferry port, check-in and go through passport control then walk on to the ship. Similarly on arrival, you can walk off the ship and connect your onward travel with the local public transport networks. Travelling on ferries by petrol/diesel car emits higher amounts of carbon dioxide (see data below regarding the carbon emissions of foot passengers and ferry car passengers). Brittany Ferries new ship is powered by LNG (liquified natural gas). LNG is a more efficient combustion process than burning traditional fossil fuels, with around 25% fewer carbon dioxide emissions. In addition, emissions are sulphur-free and there is a significant reduction in nitrogen dioxide and particulate matter. Named after the picturesque port on the Seine estuary, the 'Honfleur' will serve Brittany Ferries’ most popular route from Portsmouth to Caen.

Given that the only way to take the train to Europe involves taking the Eurostar train from London, we have named most of these trips 'London to' but if you need to travel from outside London to connect with the Eurostar, we've included guides to how to travel to Europe from outside London, such as our Guide to Travelling from the North of England To Europe Without Flying and How to Travel From Wales to Europe Without Flying.

Once you're in your holiday destination, it's much more carbon efficient to travel by public transport than hire a petrol/diesel car or fly. As well as reducing your carbon emissions, taking the train, coach or bus within a country is like travelling like a local and enables you to appreciate places that you'd otherwise miss. When you arrive at the main railway or bus station (often they're in the centre of cities rather than requiring an onward transfer from an out of town airfield where many no-frills airlines land), instead of being bombarded with endless duty free shops, there'll be buskers and bike racks.

To help you plan a holiday in the UK without a car, we've produced a series of car-free guides to many of the UK's protected areas, including the National Parks and the many lesser known Areas of Outstanding Natural Beauty (pictured below). 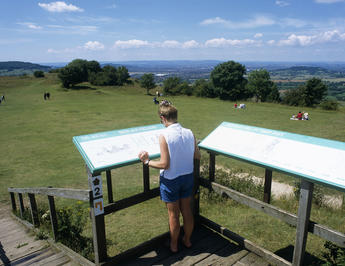 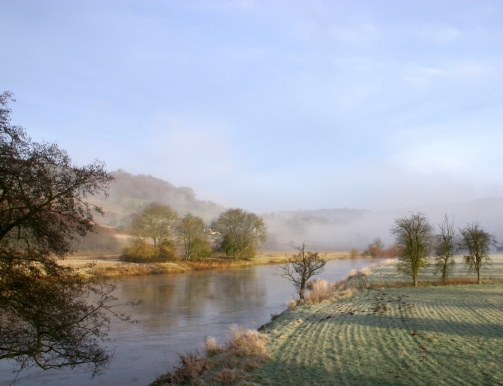 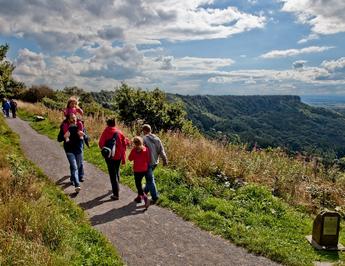 Travelling by coach is one of the greenest forms of transport. The latest data on carbon emissions provided by the Department for Business, Energy and Industrial Strategy, reports that the emissions for coaches are 0.02732kg per passenger kilometre, whereas a medium-sized car is 0.16637kg (with an average of 1.6 passengers), while a foot passenger on a ferry is 0.01874kg (car passenger is 0.12952kg), a national rail passenger travelling on UK trains is 0.03694kg while for international rail it's just 0.00497kg. A short haul flight (ie those within Europe to/from the UK) is 0.15298kg (economy class) and 0.22947kg (business class), while a domestic flight in the UK is 0.2443kg, and a long haul flight (outside of Europe) to/from the UK is 0.14615 (Economy class) and a whopping 0.42385kg in business class. The figures given for airlines include the effect of radiative forcing, which is a measure of the additional environmental impact of aviation, including emissions of nitrous oxides and water vapour when emitted at high altitude.

If you really can't do without a car, then it's more carbon efficient to hire an electric car rather than a conventionally-fuelled vehicle that runs on either diesel or petrol car, which burn fossil fuels. There has been a huge uptake in the production of electric cars in recent years and many car hire companies, such as Avis, Sixt and Enterprise now hire electric cars. Do make sure you hire a car that has the appropriate mileage per battery that's relevant for you use. Also, do check the location of the charging points that you may need to use: public charging networks provide a mixture of slow, fast and rapid charging points operated by either a national or regional network so do check before you travel where best to go. In the UK, see the Zap-Map public charging guide. In Europe, apps such as Plug Share or Chargemap show the location of charge points and the type of connectors they have installed as well as the charge speed and how to pay. For more information on charging electric cars in Europe, see the Automobile Association's guide to Charging around Europe in an electric vehicle.

There are plenty of places now that call themselves ‘green’, ‘eco’, or ‘responsible’, but how can you be sure their claims are accurate? It can often be difficult to tell the green from the greenwash, so here are a few questions that may help:

It may seem trivial, but reporting back about how green they are on review sites, such as TripAdvisor, or via social media, or on the hotel’s feedback forms, can provide invaluable information to help other travellers make more informed choices. We go into more detail in this in our post on How to tell if a hotel is green.

All of the places that we feature in our Guide to Green Places to Stay go the extra mile to adhere to all of the above criteria through minimising their use of resources and maximising their impact on the local economy. And they are all reachable without flying from the UK.

In supporting local food producers you'll not only be eating food that has a low food mileage (and therefore less associated carbon emissions as it hasn't had to be transported a long way), you'll also be supporting local economies, many of whom will have struggled during the Covid19 pandemic. When you’re eating out at restaurants, look out for those that have been vetted by the Sustainable Restaurant Association, and choose sustainable fish - the Marine Conservation Society has also produced a handy guide to sustainable seafood, with advice on avoiding endangered fish, such as bluefin tuna, see: fishonline.org. For more information about where to find local food and drink in destinations across the UK and Europe, see our section on Local Food and Drink as well as the 'Where to eat local food' in our green travel guides.

For self-catering, even with the best intentions, it’s all too easy to set off on holiday and only remember last minute that you’ll need to take food and end up just whizz via the nearest supermarket en route and turn up with bags of plastic. Far better to plan ahead and order from a local online grocer that won’t use as much plastic and will support local producers. During the lockdown, many people turned to local food deliveries and there are many such services across the country, examples include: Local Food Direct in Somerset, Norfolk Veg Box, Great Cornish Food and Great Cornish Food.

Choose low impact activities Most low-impact activities, such as cycling, canoeing, kayaking, and horse-riding enable you to reach places you couldn't otherwise get to by car. Many green places to stay now include provision for mind and body wellbeing activities, such as yoga. For more ideas of low impact holidays, see specific holidays featured in our Guide to Flight-Free Holidays, plus we feature a range of options in over 50 destinations in the UK and Europe in our Green Traveller's Guides.

We hope you enjoy the journey.

Local visitor attractions in the Broads

Where to Stay in the Broads National Park