Things to do in and around Athens

As we launch our Green Traveller's Guide to Athens, Clare Hargreaves picks out a selection of things to do in and around the Greek Capital.

If you want a change from wandering the streets on your own, there’s plenty to keep you fit and stimulated both inside and outside the city. Explore it by bike, join an organised tour of its street art or food, or team up with a professional photographer to learn how best to photograph it. At Vouliagmeni, you can take to the curative thermal waters inside a lake housing the largest underwater cave in the world. Or continue along the coast by kayak to admire Poseidon’s Temple at Cape Sounion. Alternatively, get your heart racing by exploring nearby Mount Parnitha on foot or bike. 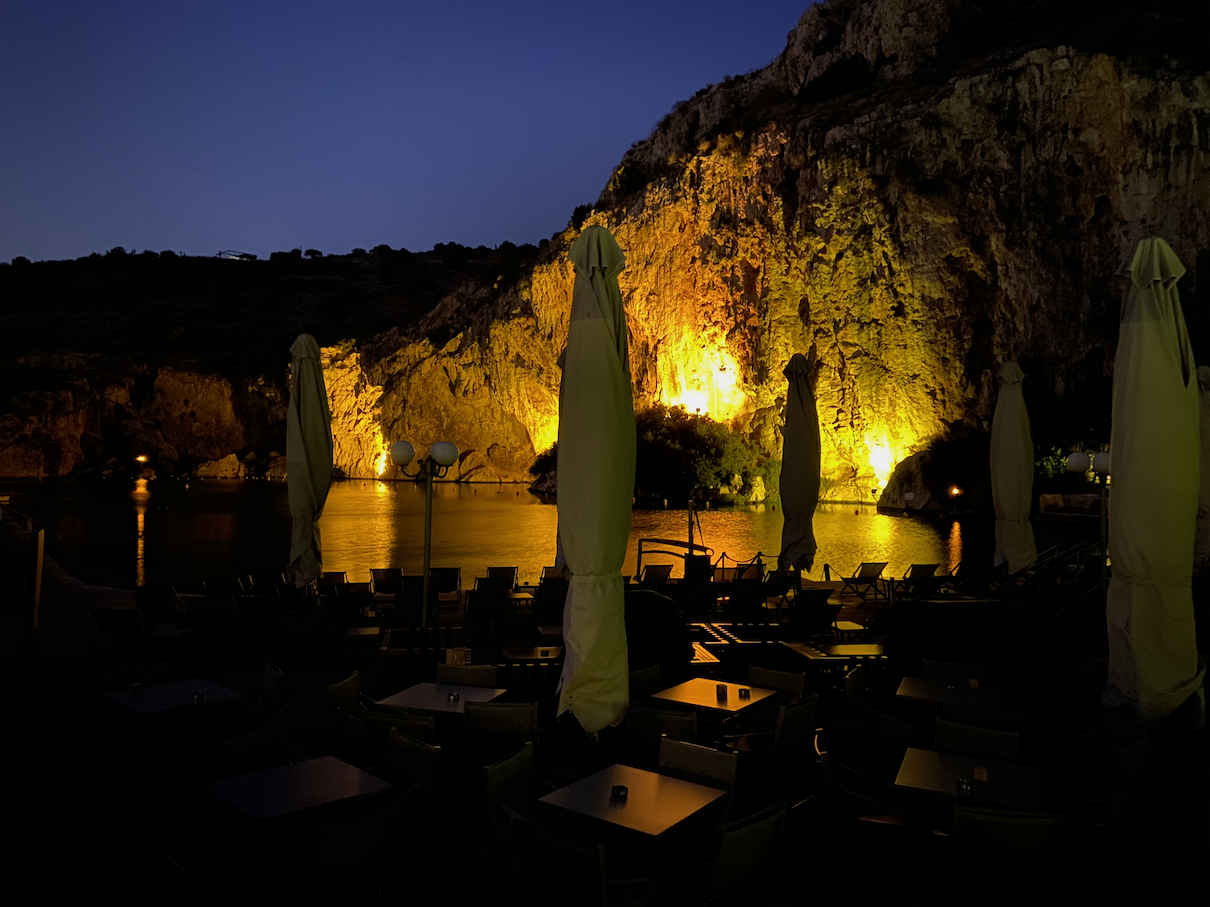 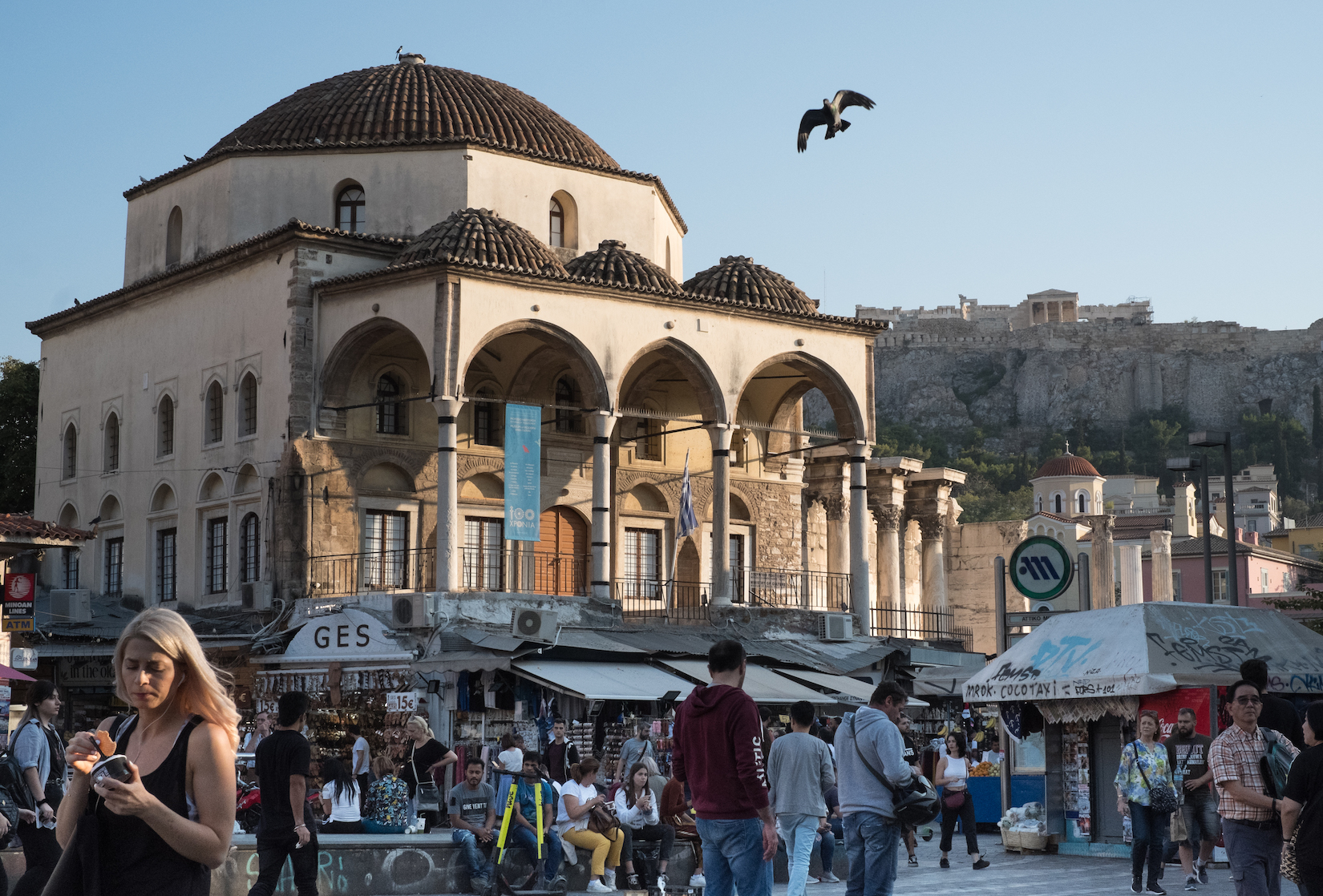 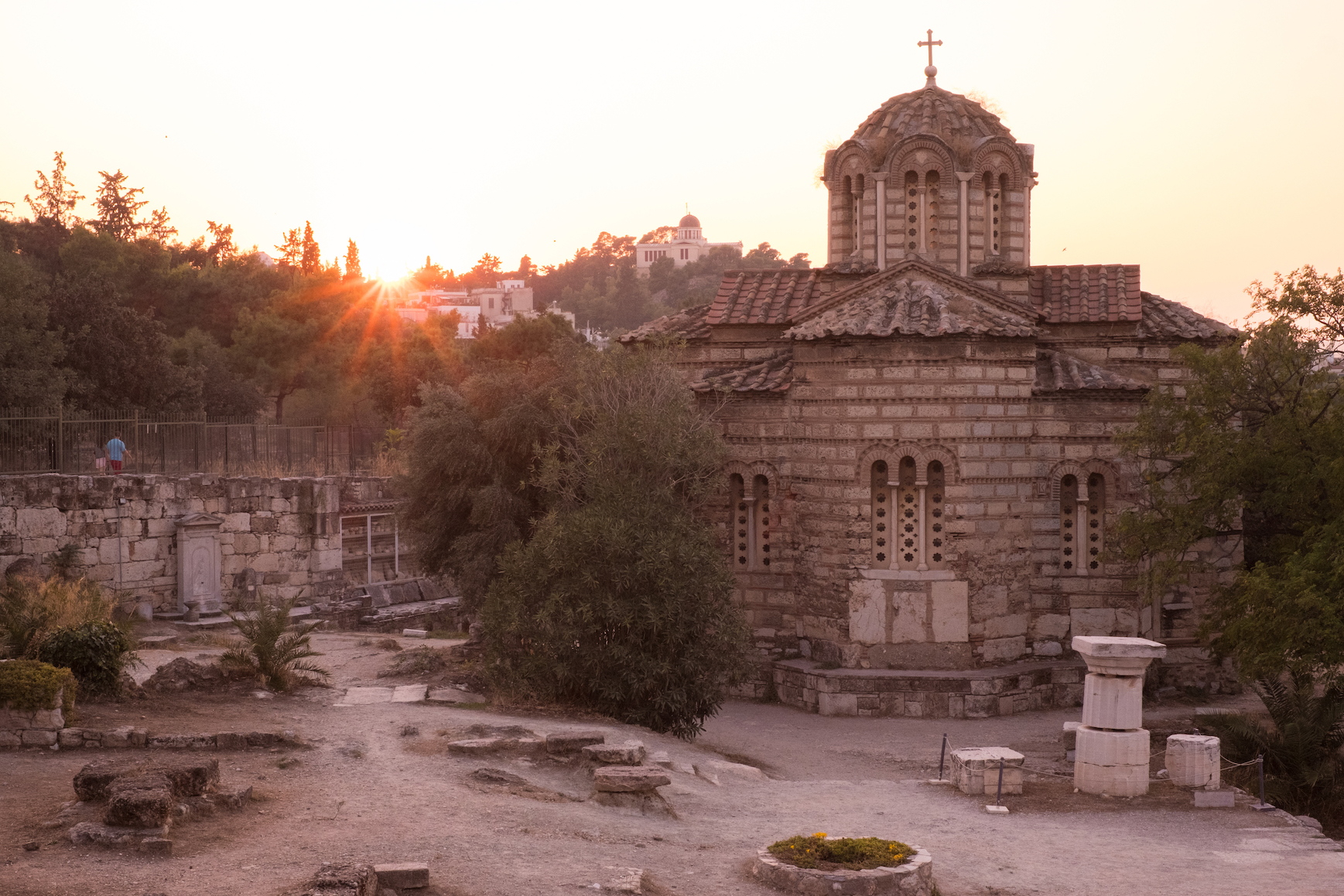 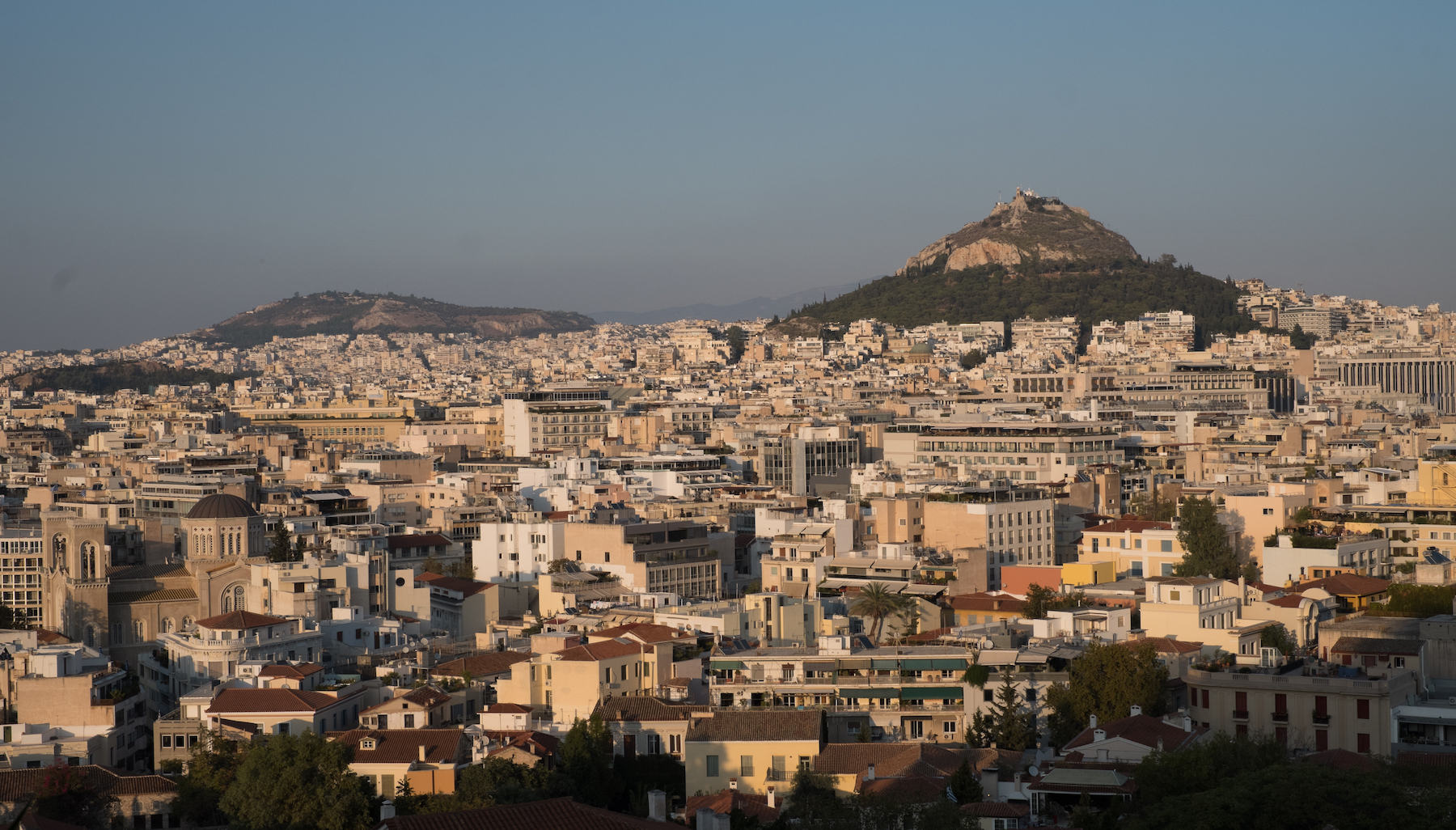 In less than an hour's drive from central Athens, you can be out trekking in the glorious National Park of Mount Parnitha. A great place to start is at the Mpafi Refuge (where there’s parking and a café) - with glorious views of the valley below - from where there are lots of walking trails through creeks and fir forests, for all abilities. En route, keep an eye out for mammals (there are over 40 in the national park), including deer (they do come close to the road so you might even see them on the drive up to the refuge from the gorge of Hounis). There are some wonderful places to go for a picnic, including via the Mola plateau where you’ll come across a small chapel and freshwater spring. Trekking Hellas can provide local tour guides to show you the way. trekking.gr/en

Swim in the thermal waters of Vouliagmeni Lake

Vouliagmeni Lake is a natural lake a stone’s thow from what’s now dubbed the “Athenian Riviera” and is essentially a natural spa. Cradled by pink limestone rock, the lake’s brackish waters are continuously replenished by both the sea and underground thermal springs, and are rich in salts and minerals. They also hold a temperature of between 22 and 29 degrees C all year long, making them a great place to relax. The lake’s waters are populated by Garra Rufa fish - sometimes called spa fish - which exfoliate your skin of its dead cells as you wallow. There’s lakeside waiter service and there’s an all-day restaurant too. vouliagmenilake.gr

See the city from a street artist’s point of view by joining this “unexpected walk around an open-air canvas.” Once you start opening your eyes, you’ll be amazed at the quantity and quality of the street art in Athens, described by The New York Times as “a contemporary Mecca for street art in Europe.” Led by an expert artist guide, you tour neighbourhoods such as Gazi, Metaxourgio and Psirri in search of edgy outdoor murals, elaborate stencils and raw graffitis. Learn what’s behind the images and how they fit into the political and social context of modern-day Athens. alternativeathens.com

This 3.5-hour tour takes you through some of the city’s most interesting neighbourhoods to discover flavours and producers that other tourists rarely encounter. Visit bakeries, delis, coffee shops and covered markets, and as you go, see how a real “Greek coffee” is made and taste local delicacies from souvlaki to bougatsa (cream-filled phylo pastries) and organic extra-virgin olive oils that you’ll never find in a supermarket. Alternative Athens also runs tours in ‘Wine tasting and Greek mezes’, as well as ‘Home cooked meals’ tours which take you into Athenians’ homes to see how Greeks cook at home. alternativeathens.com

The centre of Athens is becoming increasingly car-free so cycling is a quick and enjoyable way of seeing many of the sights from the comfort of a saddle. This half-day guided bike tour in the city’s car-free zones – with a maximum group size of 12 cyclists on 24-gear trekking-city bikes – starts in the pedestrian street near Acropolis metro station, then takes you past the new Acropolis Museum and a range of the capital’s main landmarks including the National Observatory, Kerameikos cemetery, Thission, the Ancient Greek Agora, the Roman Agora and Plaka. Cycle the shady pathways of the National Gardens to the tune of birdsong before reaching the Presidential Mansion and the magnificent neo-classical Zappeion Hall.The tour ends at the Temple of Olympian Zeus and Hadrian’s Arch. En route, the guide points out interesting facts about the sights, including tips on where to go for great local food and drink. Highly recommended. athensbybike.gr/athens-bike-tour

The purifying effect of steam and hot water was well understood by the ancient Greeks and the Romans, who built bathhouses and turned bathing into a sophisticated ritual. This long tradition has been given a stylish modern interpretation by Nikos Marinakis, who decided to build Al Hammam inside an old Greek house in ancient Plaka after discovering Athens’ Bathhouse of the Winds just 100 metres away. Sweat it out in the steam room, then enjoy a massage inside one of its treatment rooms, stunningly decorated with traditional tiles, carved wooden settles and stainless glass. There’s tea and loukoumi on the balcony afterwards. alhammam.gr

Tatoi, on a densely wooded southeast-facing slope of Mount Parnitha 27 kms from the centre of Athens, was once the summer retreat of King George and Queen Olga, and from 1948 became the royal family’s permanent residence. The estate included vineyards, vegetable gardens, extensive olive and citrus groves, stables, a winery and an olive oil mill. The area is now abandoned but is protected by the Natura 2000 network as an area of outstanding natural beauty. It’s a wonderful region to cycle through with its rich flora and fauna. After a 3.5-hour ride you have a picnic lunch before returning to Athens.

Exploring Pan’s cave on Mount Parnitha Pan’s cave, on the south-west foothills of Mount Parnitha, was discovered in the 19th century and is said to have been a place of worship for Pan and the Nymphs. It’s also known as the ‘cave of the lamps’, thanks to the fragments of oil lamps that have been found here. This day of exploration combines hiking, caving and abseiling, so you’ll need to be fit! You start by hiking to the Keladona gorge with its lush vegetation of fir, plane and chestnut trees. You then abseil into the cave, which consists of two chambers, the second hung with beautiful stalactites. trekking.gr/en/product_en/caving-mt-parnitha-athens

Watch a film at Cine Thision - outdoors beneath the Parthenon!

Silver screen buffs and nostalgics alike will love this open-air cinema which has operated since 1935. Based in Thission, just below the Parthenon, it functions from May to October, and as films start (usually around 9pm) you see the ancient temple glowing in the setting sun behind the screen. With its retro cushioned seats, with tables alongside for snacks, it oozes old-fashioned charm, and when the evenings start to get chilly blankets are provided. The cinema usually screens two films per evening, often old classics. There’s a lovely snack bar too, serving everything from tsipouro to pies and spoon sweets. cine-thisio.gr

Want to dance like a Greek? Fancy discovering your inner Zorba? This 5-hour evening session of music, dancing, and food will get you into the Greek swing of things as you learn the steps of some of the country’s most popular dances, from the famous syrtaki, to the kalamantianosand syrtos. Instruction is by some of Athens’ best dance teachers, and after your exertions you’ll be rewarded with a feast, Greek wine and some live music - all served with a view of the illuminated Acropolis. No skill or previous dancing experience required, so get your dancing shoes on now! greeking.me and likealocalguide.com

A centrepiece as spectacular as the Acropolis is crying out to be photographed. But how do you do that in the best light in a way that looks professional? What is the best time of day to get your camera clicking? If you’re asking those questions then this tour could be for you. It consists of a two-hour one-to-one session with professional photographer Michalis Christou during which you photograph the area of Athens of your choice - there are seven routes to choose from, ranging from the Acropolis to Athens’ historic hills and neighbourhoods, or the beach. You can also decide whether to shoot in the daytime or at night. Check out Michalis’ images on his Instagram feed @michalis_m_christou likealocalguide.com

Leave the city bustle behind with this half-day sea kayak adventure along the Athenian Riviera as far as Cape Sounion and its Temple of Poseidon (celebrated by Lord Byron with his ‘Place me on Sunium’s marbled step’ in Don Juan). Escorted by a guide, you paddle along the coastline of the Saronic Gulf, stopping for swims and snacks en route. Admire the Temple of Poseidon from your kayak, then step ashore to explore the well-preserved Doric-style temple (entrance fee included). Round off your trip with lunch at a taverna with views over the cape. Kayaking and snorkling equipment provided. viator.com/en-GB/tours/Athens/Athens-Sea-Kayak/d496-9238P16

Local visitor attractions in the Broads