Places to eat in Pelion, Greece

As we launch our Green Traveller's Guide to Pelion, Clare Hargreaves picks out a selection of places to eat selling locally produced seasonal food. 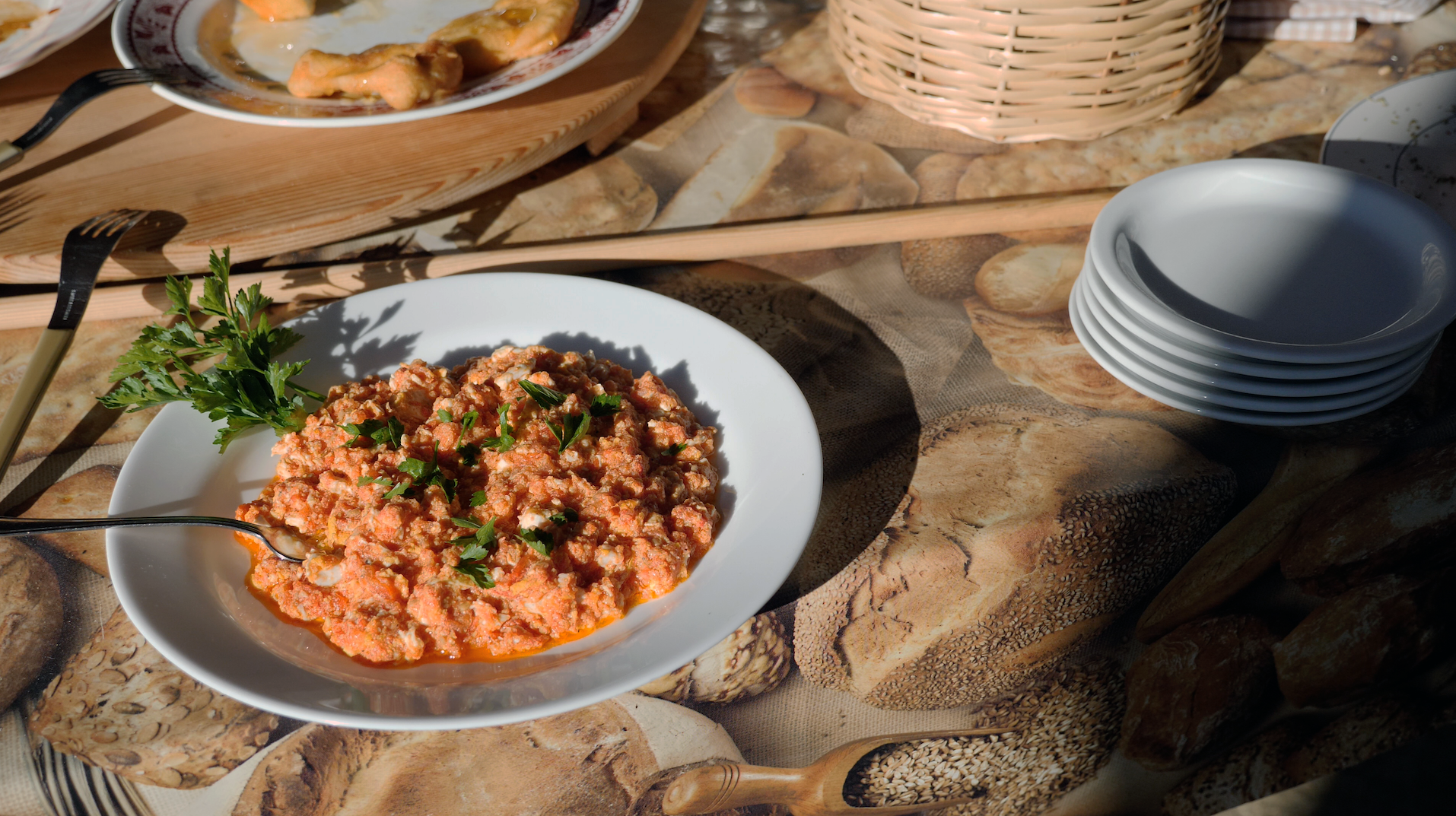 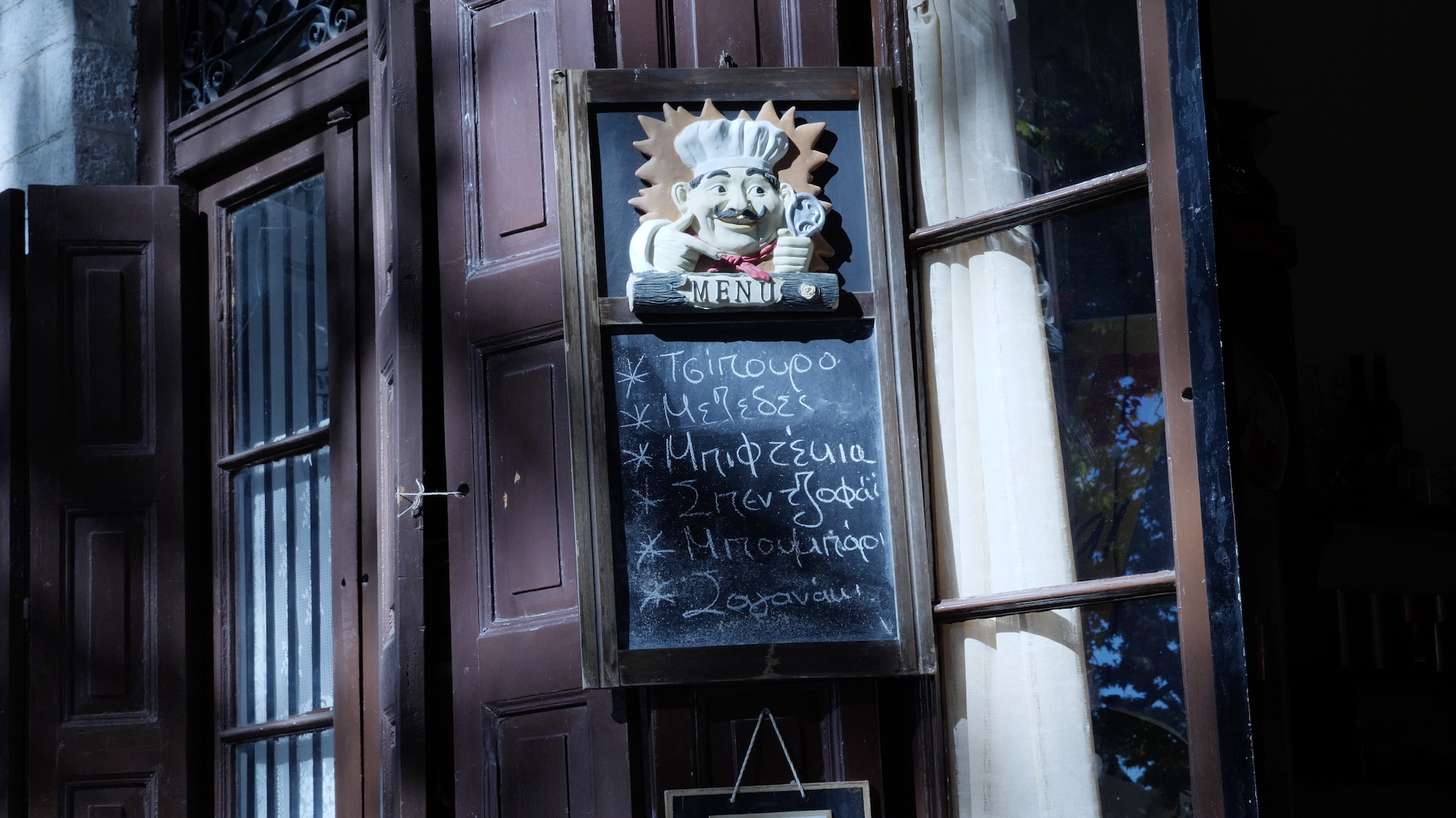 The joy of a peninsula, with both mountain and coastline, is the diversity of its seasonal food larder. Settle into a seafront taverna and pair your tsipouro (Greek grappa) with mezedes of grilled octopus, pickled rock samphire or deep-fried sea anenome. Venture inland and savour everything from wild greens to apples, chestnuts and wild boar. You’ll also find the ingredients - green peppers, tomatoes and sausage - for Pelion’s most famous dish, spetzofai. Most of Pelion’s restaurants are relaxed family-run affairs, often in the enchanting setting of a cobbled village square. But if it’s table-clothed gastronomy you’re seeking, Pelion offers that too.

Sit outside in the square or grab a seat indoors by the neo-classical Egyptian-style fireplace. Either way, you’re in for a treat: Kritsa is one of Pelion’s most convivial eateries, offering seriously delicious rustic fare with some of the region’s best organic wines to boot. It’s run by Eleni Karaiskou and her extended family, with many ingredients hailing from their farm where Eleni also runs a cookery school. Specialities range from simple Foraged greens with eggs to hearty renditions of Pelion classics like spetzofai and strapatsada. To sample the belter breakfasts, book into one of the seven rooms upstairs. hotel-kritsa.gr and peliongastronomy.gr

In spring, you’ll find wild asparagus and in autumn, stuffed mushrooms or locally foraged sweet chestnuts that accompany chef Theodoros Tzembetzis’ aromatic slow-cooked veal. This congenial restaurant-cafe, on Tsgarada’s main street, is firmly rooted in the seasons and local soil. Like Kritsa, it’s a family business, set up by the parents of Theodoros’ wife Eleni who still help out by making savoury pies and puddings from local ingredients. Also try the imaginative salads, as well as the knockout kokoras me xilopites (chicken with homemade tagliatelle). There’s a cafe next door and upstairs, ten simple bedrooms too. alekas-house.gr

Given its panoramic views over one of Pelion’s most spectacular beaches, it’s no surprise that seafood - from squid and octopus to anchovies and bream - is the centrepiece at this recently expanded clifftop glass-framed restaurant. It’s caught by the father of Aggelika who runs it, so dishes, such as the taverna’s famous fish soup, revolve around whatever fish he’s landed that day. But it’s not just fish that hits the mark here; starters such as the grilled aubergine with feta, tomatoes and parsley, or the innovative politikisalata - made from dill, grated cabbage and carrot - are equally delicious. aggelikapelion.gr

Expect high-end gastronomy at this beachside restaurant attached to a luxury seven-room guesthouse. Ingredients are as home-grown as anywhere else, but, under the guidance of Athenian superchef Giannis Baxevanis, they are transformed into cutting edge dishes. You might start with fish carpaccio with sea fennel and aged tsipouro, followed with a Spetzofai tagliatelle with fried mizithra cheese and peppers - a twist on Pelion’s spetzofai. Grab a verandah seat and watch the sunset as you feast. sixkeys.gr

At this roadside taverna opposite Milia’s main square, there are traditional Pelion favourites, such as rooster cooked in wine to boubari (intestines stuffed with mince and rice), but its speciality is its hearty stews slow-cooked in whopper earthenware pots; try the Giulbasi (kid goat, veal and pork stewed with tomato, peppers and garlic) or the Salkimi, a stew of veal, courgettes, aubergines and peppers that’s topped with bechamel sauce and cheese and grilled.

The views from this bijou restaurant (whose name means cardamom) near Makrinitsa’s dreamy square are as good as the food. In the evening, sit out on the balcony and watch the flickering lights of Volos below as you tuck into specialities such as aubergine and veal stew or rooster with homemade pasta. In autumn, snuggle by the fire in its artefact-decked interior and enjoy foraged mushrooms or giant beans with lemon sauce - a nice twist on the usual gigantes in a tomato sauce. It’s all so hearty and friendly you could almost be in the owner’s home. restaurantkardamo.business.site (greek only)

Pelion’s communal tipple is tsipouro, a firewater made from the grape skins after they’ve been pressed to make wine, and it’s served in tavernas known as tsipouradika. At Archipelagos, on Volos’ harbour-front, as in other tsipouradika, each diddy 50ml bottle (choose with or without aniseed) brings a different plate of home-cooked food. As you’d expect, most revolve around seafood, such as mussel risotto, deep-fried sea anemone, or grilled octopus. But the pickled kritamo (rock samphire), fried aubergine and salad dishes are equally delicious. archipelagos.com

Traditional family-run taverna, serving simple fare with lashings of atmosphere in an unspoiled mountain village. Sit at one of the check-tableclothed tables on the tree-shaded terrace and gaze out over the Pagasitic Gulf below, or if it’s chilly, snuggle by the hearth inside. Food is mainly home-grown or in the case of meat, from local free-range farms, and even the tsipouro and wines are homemade too. There’s a wide range of starters (such as grilled sardines with green beans), while mains tend to be roasts or grills, generally of goat, veal or lamb.

The name of this bar (meaning “Anna, here’s an apple”) comes from a phrase taught to all Greek school children to teach them their alphabet. But there’s nothing elementary about this cosy roadside cafe-bar, just off the square of the mountain village of Milies, that’s probably as close as Pelion gets to hipster. Enjoy the colourful prints and posters plastering the walls as you sample a Greek coffee served from a traditional copper pot, or one of its homemade desserts (the lemon mousse and the cheesecake get our vote). A great place for people watching.

Field to fork eating doesn’t get much better than at this flower-draped neighbourhood eatery, known by the locals as Niki’s after its motherly owner. Niki grows much of her own produce, from the courgette flowers and cabbage leaves that she stuffs, to the tomatoes that she grates into her spetzofai. Goat and wild boar are slowly braised with oil and garlic until meltingly tender, while dessert is likely to revolve around the local firiki apple for which Zagora is famous. Sit on the verandah for views of the turquoise Aegean below or inside to watch the village goings-on. meintani.gr

The tiny postcard-perfect port of Damouhari, with its ancient Venetian architecture, leapt to fame after being chosen as the location where Mamma Mia was filmed. Thankfully it’s still a tranquil spot populated by self-catering cottages and a handful of tavernas from which Karagatsi stands out. Personable chef-owner Apostolis serves up wonderful Pelion staples but fresh fish is the must-eat, along with tasty mezedes such as homemade taramosalata. Watch the skies turn crimson over neighbouring Alonissos and Skiathos as you dine.

Places to Eat in Gower

Places to Eat in Llŷn

Places to Eat in the Clwydian Range & Dee Valley