Richard Hammond's blog and video of his 7-day 'Grand Tour of Switzerland' by train and boat, departing from London St Pancras International Railway Station by Eurostar then boarding trains and boats in Switzerland, including the Glacier Express, Gornergrat (for views of the Matterhorn and then the Lauterbrunnen Valley), the Jungfrau - the highest railway in Europe, and Mount Rigi railway - the first ever mountain railway (to Mt. Rigi Kulm) - and the boat across Lake Lucerne, before returning by train via Geneva and Paris and to London.

Thanks to all those that sent us tips for Richard's trip via Twitter (hashtag #agrandtour), Green Traveller's Facebook Page, or via the 'add a comment' facility on this blog (now disabled as the competition has now ended). The winner, Anthony Lambert, was given 2 x First Class 4-day Swiss Passes that cover unlimited travel on consecutive days throughout the Swiss Travel System network that Richard used.

For a holiday that incorporates something similar to Richard's trip by train in Switzerland, see: Inntravel's Across the Roof of Europe

Here are Richard's updates from the trip (nb. all timings are local):

8.15pm Arrived London St Pancras International. That's it! The end of our Grand Tour of Switzerland. Thanks to everyone who sent in tips on where to visit, we're have some terrific recommendations and it's been a fantastic week, topped off by the celebrations in Lucerne for Swiss National Day. Thanks also to Rebecca Bruce at Inntravel who expertly organised our itinerary and to Heidi Reisz and Julie Melet at Swiss Tourism for their help with our train tickets. The entire trip was filmed and the video will be posted up on greentraveller in the next few weeks.

12.53pm Arrived Geneva, lunch at the station cafe (just outside the station) then caught the 13.41. to Paris Gare de Lyon, arrived 16.53 and crossed by metro (RER D) to Gare de Nord to catch the 1843 to London. For more information about crossing metro stations in Paris, see our guide to How to transfer between train stations in Paris.

The boat back to Lucerne to spend our final night

Day 7: 8am Breakfast at Hotel Wilden Mannm, then caught the 10am train to Geneva.

8pm Dinner at Scala Restaurant in the Art Deco Hotel Montana, high up in the hills overlooking Lake Lucerne

16.10 Boarded the boat back to Lucerne and headed for the Lucerne Lido.

12.09 Arrived Vitznauand caught the first ever mountain railway to Mt. Rigi Kulm, 1800m above sea level. Then walked down to Rigi Kaltbad and had lunch at Rigis Berggenuss then caught the cable car down to Weggis.

9am-11am Walked around the old quarter of Lucerne, then caught the 11.12 boat (from just outside the main train station) to Vitzau. 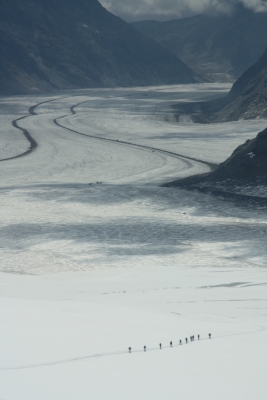 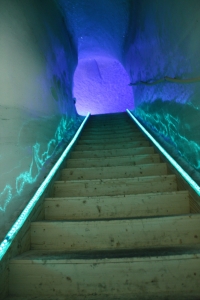 18.30 Arrived Lucerne and checked in to Hotel Wilden Mann.

4pm Train back to to Meirangan to catch the train to Lucerne.

11am Train to Interlaken then Meirangan to catch the local train to the Aareschlucht Gorge - as suggested by Anthony Lambert (see comment at the foot of this page).

Day 5: 8am Breakfast at Hotel Alpenrose then took the cable car up to Mannlichen to see the mountain trio of the Eiger, Monch and the Jungfrau.

Day 4: 8am Breakfast at Hotel Alpenrose then caught the 09.12 train up to Kleine Scheidegg to catch the Jungfrau railway up towards the Jungfrau - the highest railway in Europe.

14.00 Train to Wengen via Lauterbrunnen. Arrived and transfer by eletric taxi to Hotel Alpenrose, one of the oldest hotels in the town. It's in a fabulous setting - setting high up in the mountains overlooking icy peaks of the Breithorm and Tschingelhorn, and the lush Lauterbrunnen valley.

Photo: The view of the Lauterbrunnen Valley on the train from Wengen. Photo Richard Hammond

9am-12pm: Train up to Gornergratt. We were given access to the driver's cabin, so watch out for the 'driver's view' of the Gornergratt in the video we produced. The journey up to Gornergratt departs from the centre of Zermatt (at the foot of the town's main thoroughfare) and winds its way through the town then climbs uphill providing magnificent views of the Matterhorn (Monte Cervino, in Italian) above Zermatt.

The route goes via Riffelalp and Rotenboden then arrives at Gornergratt. after about 40 minutes; here's map of the Gornergratt route. We passed through some clouds, but as we arrived at the top, there was a break in the swirling mist and the majestic sight of the Matterhorn came into view, in all its glory.

Day 3: Breakfast at Hotel Ginabelle then we're taking the famous Gornergrat train up to 3089m for hopefully some stellar views of the Matterhorn...

On the way up to the Gornergrat, the mist cleared to reveal the Matterhorn, in all its glory. Photo Richard Hammond

1752 Arrived Zermatt and took an electric taxi 5 mnins to Hotel Ginabelle. Zermatt is car-free so there are only electric vehicles in the town. Had dinner at the hotel then walked into town to Cafe du Pont, as recommended on twitter @mattewteller.

The famous Glacier Express goes from St Moritz to Zermatt.

Day 2: 0800 Breakfast at Hotel Engiadina then caught the 0956 train to Samedan (arr 10.11) to board the 10.17 Glacier Express to Zermatt. The train actually starts at St Moritz so there were already quite a few passengers on board. The journey lasts just over 7 hours and passed through some of the most spectacular scenery in the Swiss Alps via the Landwasser viaduct, Chur (the oldest town in Switzerland), the Rhine gorge, Disentis, the Oberalppass -the highest point of the journey (here the engine pulls the train up to 2,033 metres above sea level with the help of a cog wheel), Andermatt, Brig (the centre of German-speaking Valais) and finally it passes through wild larch woods along a valley to Zermatt.

23.26 Arrived Zuoz and a short (2-min taxi ride) up a steep hill into Zuoz and checked in to Hotel Engiadina. That's quite a slog by train in a day, but the idea is that tomorrow we can board the world-famous Glacier Express to Zermatt.

19.00 Arrived Zurich and caught the 19.37 train to Klosters and Sagliains.

12.47 Arrived Paris Gare du Nord, walked about 5 mins to Gare de l'Est and had lunch at the wonderful Brasserie Flo. For tips on how to cross Paris, see our guide to How to transfer between train stations in Paris.

Day 1: Wednesday 27 July 09.22 Departed London St Pancras to the sound of the tannoy announcing it is one year exactly until the start of the London Olympics.

Disclaimer: This trip was organised with the cooperation of Inntravel and Swiss Tourism. Green Traveller retained all independent editorial control over the work, which has been written by Richard Hammond in his own words based on his own experience of the trip.